I know, there have been plenty of new additions to the house with the Bat.  And now it seems that there is a cat - or a kitten! 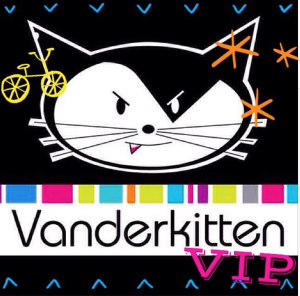 For the 2015 year, I'll be training and participating in events as a Vanderkitten VIP, which is basically the Vanderkitten Brand Ambassador-type program.  I admit that I was super surprised.  I'd been looking at VK gear for over a year and was planning on getting a kit.  When I saw that they were soliciting applications for the 2015 VIP program, I thought "Why not apply?  I have nothing to lose."  So, I applied, hit "send" and didn't hear from the company for a while.  Then, last week, I got an email informing me that I had been selected as a VIP.  Whoo-hoo!

The company's slogan is "Clothing for women who kick ass" and it supports women in a variety of sports, but focusing on biking (mountain, cyclocross and road).  It's a bit daunting for me to be included in such a group, but I'll try to rise to the challenge!  I'm definitely excited to connect with other women who are swim/bike/running.  While I lean heavily to the introverted side of things, I do find that meeting up with people, especially for training (serious or not), is energizing, and I'm hoping that I'll find a few more training partners and get to know some cool women.  All while sporting some great gear!
Posted by Kristina at 6:56 AM 7 comments:

Gratitude is one of those ubiquitous topics at this time of year, and it probably should be more common, for me at least, on regular basis.  Also, I'm always a bit late with my Thanksgiving post (see last year) and the beginning of December is such a fun time as well with Michael's birthday, so a later gratitude/Thanksgiving post seems appropriate.

But I do have so much to be thankful for right now, and it's nice to remember that and take stock. First of all, we had a fabulous Thanksgiving break.  It was low-key, but just what we needed, a mix of social outings (we went out for Mexican food twice - how is that not a major win?!), plenty of fun activities and also some down-time.  Thanksgiving day was busy early on, as I went and "oversaw" students who were making food that we then delivered to The Midnight Mission, an organization in Downtown LA that helps homeless families and individuals.  I hate to admit this, but I was a bit grumbly before, not nearly as excited about helping out as I should have been.  However, once I arrived on Thursday morning and the kids came, something *clicked* and I realized that I was so lucky to be able to help out in this very small way.  Also, the kids really do most of the work - they just need an adult around in case there's an issue, like someone cuts off a finger (hasn't happened yet, knock on wood).

Once I returned home, we had a low-key Thanksgiving dinner, just the two of us, but then met at some friends' for dessert which was fantastic - a nice buffet of pies, bread pudding, cookies and we brought a pear and apple crisp with whipped cream.  We followed up Thursday with a trip to West LA, looking for bike gear for me and finishing that outing at LACMA.  We really enjoyed the two exhibits we saw - Samurai: Japanese Armor and Pierre Huyghe (I'd never heard of the latter, but apparently he is a big deal, at least according to the NYTimes, and so is this exhibit;  I must admit that I looked up information about Pierre Huyghe after the exhibit, but maybe that's the point of going to a museum?).

Returning to work this week was a bit brutal, but knowing that we have Christmas break right around the corner has helped!  Also, celebrating Michael's birthday gave us both something to look forward to. It was pretty low-key in terms of gift-giving, but we went out to dinner on Saturday at a new place that, as they say, knocked our socks off.  I'd read good reviews of Bäco Mercat, but really had no idea what to expect.  It's funny, when we lived in Silverlake, we rarely ate at places in Downtown and usually headed further west for a "fancy" night out.  Now that we are further east, the idea of going so much further west seems ridiculous.  Fortunately, a lot of great restaurants have opened up Downtown, so we are happy to explore at least one of those new, hip and happening places.  And, holy crap, it was amazing - one of the best meals I've had.  EVER, I think.  It was that good.  I don't even know what kind of food I would call it because some dishes had a Middle Eastern tang, like the fried squash blossoms and the sunchoke dish that we ordered (sunchokes are amazing, by the way, as I discovered last night), but then other dishes definitely leaned to Asian influences, like the peppers and kale and the duck confit, which I could only describe with superlative after superlative.  And I don't mean to forget about the drinks and desserts.  The drinks feature "shrub", which Jonathan Gold, the LA Times and LAWeekly food critic, describes here:  "Shrub is an artisanal thing, the bartender's equivalent of the array of jams and preserves flooding Etsy at the moment."  I also loved that it was a very casual place - and fantastic for people watching!

The other major gratitude this week?  RAIN!  Yes, it rained in Southern CA, like a real storm.  While it certainly doesn't solve the drought, it came as welcome relief and we might even get some more rain this week (please, please, please).  The best thing about the rain?  Going for a run in the days following the storm.  Southern CA is at its best following a storm.

And, finally, a nice social ride today.  I've been trying to amp up training a bit, but haven't wanted to be TOO focused at this point about 2015.  An easy, 90-minute ride just for fun was perfect.

So, lots of small moments to enjoy and take in and appreciate.
Posted by Kristina at 7:49 AM 2 comments:

Technically, I don't live in LA, so to think that my blog,"Walking in LA," is a bit of a misnomer. However, it's more the general "Los Angeles/Southern CA" experience that I want to capture, showing both my adventurous and quotidian life. I'm a California transplant, and while I plan to move in five years from now, I'm not sure what will happen. So, in the meantime, I'm focusing on living in SoCal and on enjoying the life I have here, all the while I add to that life.

Kristina
40-something wanderer who is settling down but still hankers for a walkabout and adventure. Looking to balance that wanderlust with the responsibility of dogs, relationships, teaching and life in general while staying active and not going crazy!